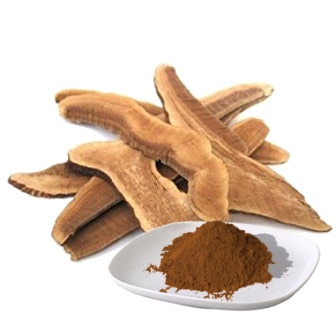 
Mass fraction of moisture in the dry extract is not more than 10%.
The mass fraction of moisture in the thick extract is not more than 50%.
Mass fraction of insoluble substances in water not more than 5%.
Medicinal properties of the mushroom due to the content of two main components. The first is a polysaccharide that contains beta glucan. Beta glucan is known for its ability to enhance the immune system. The second important component of the fungus is an ingredient that belongs to the triterpene group, which can alleviate Allergy symptoms by suppressing histamine secretion.

Mushroom has antioxidant properties. Antioxidants protect the body from the negative effects of free radicals. As noted, the first signs of improving health can be observed already after 10-14 days of daily use of this fungus. For a good health effect, you need to take Lingzhi mushroom in the morning on an empty stomach and with plenty of water, which helps to remove toxins from the body. Simultaneous reception of the fungus with vitamin C enhances this effect. It is believed that Ganoderma fungus can inhibit the growth of cancerous tumors. Ganoderma is also useful for people suffering from asthma and other respiratory diseases. This fungus has anti-inflammatory properties and can be used in diseases of the joints, such as arthritis, rheumatism.

About the benefits of the Lingzhi mushroom says a lot and research on its use for treatment are conducted to this day. It is recommended to take for: • Rising immunity; • In viral infections such as influenza; • In pulmonary and respiratory diseases (asthma, bronchitis) • In cardiovascular diseases, such as high blood pressure, elevated cholesterol; • In kidney disease; • Against cancer; • In liver disease; • Chronic fatigue syndrome; • For insomnia; • In the gastro-intestinal diseases; • At poisonings. • It can be used for diseases such as AIDS/HIV as an immuno-restorative.