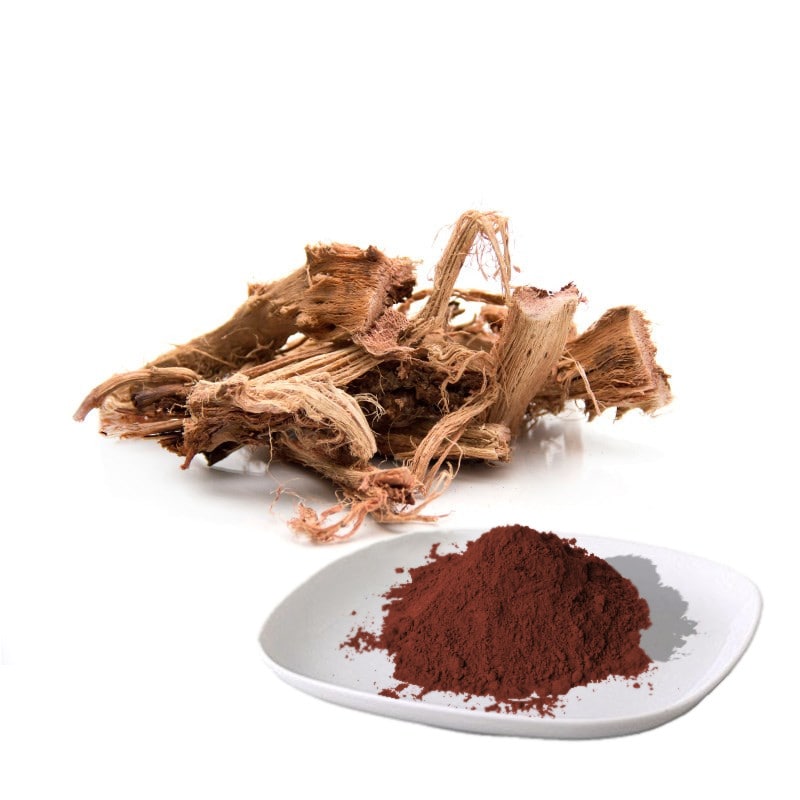 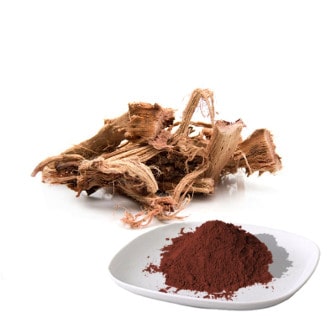 The main active substances of the plant are considered tannins, triterpene saponins, canton hedysari, coumarins, flavonoids, as well as free amino acids. Its underground part contains quite a large number of oligomeric catechins of a special condensed type. Exactly they belong to the unique bioflavonoids, which is dyed with an infusion of red root in a bright red color. Catechins have a fairly high P-vitamin activity, they perfectly restore and strengthen the walls of capillaries, quickly remove various heavy metals from the human body, and have antioxidant activity, neutralizing free radicals. In addition to coumarins and tannins, traces of alkaloids, steroid saponins, macronutrients and xanthones, as well as polystochide and hyperoside were found in the aboveground part of this delightful plant. Due to xanthone glycoside mangiferin, the red root has a high biological activity. Flavonoids are found in the grass of the plant, and ascorbic acid is found in its leaves. In the roots and rhizomes there are polysaccharides such as xylose, which are galactose derivatives, galacturonic acid and rhamnose. The plant is considered a natural non-hormonal stimulator of important sexual activity with a mild, gentle effect, which is important for any man.

The red root also has an excellent stimulating effect on the human heart muscle. For the treatment of various serious diseases of the respiratory tract (bronchi and lungs), as well as with the accompanying ailments of the urogenital system, various drugs with a high content of red root are shown. In the complex therapy with the main medicinal purpose, this plant significantly reduces the intensity of cough, relieves sputum purulence and generally improves psycho-emotional status. Red root normalizes blood counts, reduces the number of diuretic disorders, and decreases pain. Such a wonderful expectorant is indispensable in the treatment of respiratory organs. Often, various means on the basis of the presented plants are prescribed for gastrointestinal diseases of an acute nature. Moreover, the perennial is used as an excellent analgesic and antitumor agent. It should be recalled that the plant also has a fairly high immunostimulatory effect. In ancient times, the powder based on the red root was prescribed for epilepsy in the form of a soothing drug.

In folk medicine, red root has long been used to treat prostatitis and its dangerous complications. These include sexual dysfunction, urinary disorders, infertility, and chronic pain in the perineum and in the male genital area. It is effective in the treatment of various cancer tumors. Due to its biologically active substances, the plant has in addition to a therapeutic effect and a pronounced healing effect on the entire human body as a whole. Unique flavonoids have a positive effect on the male prostate gland, while the smooth musculature of the ducts of all the prostate glands relaxes. This leads to the restoration of the outflow of prostatic juice, resulting in improved blood circulation. Nonspecific stimulating effect of all components of this plant perfectly restores sexual function in men. The regulation of erection and sexual desire determine the various healing properties of the red root. Various decoctions and infusions are recommended to take a few hours before bedtime. In chronic prostatitis, various preparations with a red root content are prescribed along with the main treatment with modern pharmacological preparations. For best results, you can additionally use immunostimulating agents.

Miraculous red root is used to effectively treat such female diseases as breast ailments, uterus prolapse, and uterine bleeding. In addition, it has proven an undoubted effect in the treatment of diseases of the bladder, prolapse of the rectum, problems with the central nervous system, liver disease, edema, and anemia. This plant helps to maintain the necessary balance of fluids in the body. It quickly removes excess fluid from the body and promptly makes up for its deficiency. Various biologically active drugs with a red root content perfectly relieve symptoms and quickly normalize urination. They produce a diuretic effect, contribute to the convergence of edema. Moreover, the means are indicated for the normalization of the tone of tissues and muscles, which is important for women in labor. The unique anti-inflammatory effect is indispensable for problems with the respiratory and urogenital system. It should be noted that such a herbaceous perennial is an excellent prophylactic against breast cancer. It is perfectly combined with therapeutic complexes in the treatment of many breast ailments. By improving muscle tone, he easily copes with prolapse of the uterus and rectum. Restoring the reproductive system, the red root can significantly improve the sex life of every woman. By increasing the concentration of hemoglobin, the plant eliminates anemia, boosts immunity and normalizes sleep. Moreover, it has been proven that certain drugs with a red root quickly relieve headaches, neutralize fatigue, fight against nervous breakdowns and emotions of excessive nature.